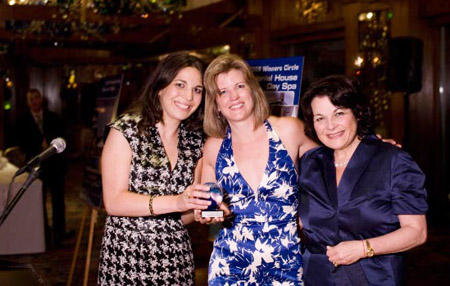 Julie Mahoney, owner of Oasis Day Spa in Columbian Square, Weymouth was honored with the first Repechage Presidents Award for Spa Excellence at the 11th Repechage Congress Gala held at Tavern in the Green in New York City. Lydia Sarfati (above right), President and CEO of Repechage, has known Julie for the past 23 years and has watched her develop her knowledge and expertise in the field of esthetics. She was a young woman of 18 when she first became an esthetician and was first to open a day spa on the south shore in 1996. Oasis has grown from a small company of 7 employees to a current staff of 35. Oasis Day Spa is a Spa De Beaute concept spa for the world renowned seaweed based line, Repechage.